The rules for naming monoclonal antibodies have changed…

The first monoclonal antibody to achieve marketing approval was Muromonab in 1986. Since then, monoclonal antibodies have become one of the most successful classes of current medicines bringing new therapies for cancer, immune diseases and a growing number of other indications.

Despite the success of monoclonal antibodies in the clinic, some of the nuances of this class of therapeutics can be poorly understood. To improve wider understanding of these complex therapeutics, this is a brief review of the rules and meanings of antibody names and the latest changes that mean there will be no more “mabs”.

Although the names given to antibodies can seem confusing at first, there is a structure hidden within them.
In 1995, the international non-proprietary name (INN) expert group of the World Health Organization (WHO) published rules for naming monoclonal antibodies to ensure that every name was globally recognised and unique to a single product. Each name is organised with a prefix- two substems and a stem (as represented in the example below) and these morphemes convey specific information about the protein.

The prefix itself does not follow any specific criteria but is unique for each product. The target substem (also called substem A) specifies the target of the antibody such as a tumour or bacteria. The source substem (B) relates to the species from which the monoclonal antibody was derived, so antibodies that were derived from a mouse for example would contain the substem “o”. The stem or suffix “mab” has been common for all monoclonal antibodies. The different parts of antibody names are further explained below.

This is the part of the product name that will change in the most noticeable way following changes to naming rules issued in late 2021. Until now, all antibodies have been easily identified by the “mab” stem, with only rare exceptions (muromonab being one example).

The latest update of the naming rules from the INN expert group replaces “mab” with four alternative names. This expanded collection of name stems has been introduced to accommodate the increasing number of antibodies, to decrease sound-alikes, and to provide information about modifications to the immunoglobulin structure.
These changes reflect the increasing importance of our understanding of how antibodies interact with different components of the immune system, and how genetic engineering of their fragment crystallisable (Fc) regions can modulate those interactions for therapeutic benefit.

For example, some Fc regions can be changed to increase functional activities such as antibody dependent cellular phagocytosis (ADCP). Alternatively, where the purpose of the antibody is to block receptor interactions, such as PD-1 inhibitors, or to bind and neutralise a protein, the antibody may be modified to decrease such functional activity. The four new name stems are explained further below. 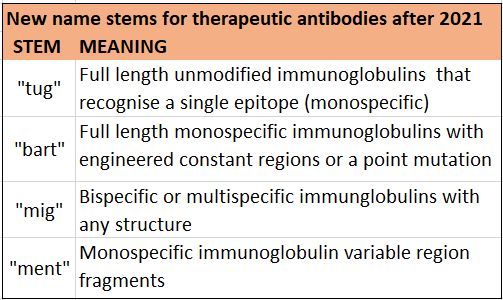 For antibodies named until early 2017, the source substem relates to the animal from which the antibody was obtained.

Early monoclonal antibodies were produced in mice (substem “o”, yielding the ending -omab) or other non-human organisms. These products had the potential to induce anti-drug antibodies in the patient, making the therapies less effective over time.

Subsequent development of antibodies has seen a trend toward more humanised products that are less immunogenic. This can be achieved by replacing parts of the antibody with human amino acid sequences, or pure human antibodies can be engineered.

If the constant region is replaced with the human form, the antibody is termed chimeric and the substem “xi” was used. Part of the variable regions may also be substituted in which case it is called humanised and “zu” was used.

In theory, antibodies could be produced from rats (“a”), hamsters (“e”) or primates (“i”), although no products derived this way ever applied for a non-proprietary name. As part of the revision of antibody nomenclature the source substem will no longer be included in new names, reflecting the trend toward humanised and fully human antibodies.

The substem preceding the source of the antibody refers to the medicine’s target, or the epitope to which the antibody binds. Examples are tumours, organ systems like the circulatory system, or infectious agents like bacteria or viruses.

In the naming scheme as originally developed, these substems mostly consisted of a consonant, a vowel, then another consonant (-thanks Rachel!). The final letter could be dropped if the resulting name was difficult to pronounce.

Examples of target substems include -ci(r)- for the circulatory system, -li(m)- for the immune system (lim stands for lymphocyte) and -ne(r)- for the nervous system. The final letter was usually omitted if the following source substem begins with a consonant (such as -zu- or -xi). Combination of target and source substems resulted in endings like -limumab (immune system, human) or -ciximab (circulatory system, chimeric).

New and shorter target substems were adopted in 2009. They mostly consist of a consonant, plus a vowel which is omitted if the source substem begins with a vowel. For example, human antibodies targeting the immune system receive names ending in -lumab instead of the old -limumab.

Some endings like -ciximab remained unchanged. The old system employed seven different substems for tumour targets, depending on the type of tumour. Because many antibodies are investigated for several tumour types, the new convention only has -t(a)- to denote a tumour target. With the source substem being discontinued in 2017, the need for dropping the final vowel of the target substem disappeared.

The non-proprietary names given to monoclonal antibodies can appear random but do follow a defined structure and rules that can change every few years.

Since the early antibodies entered the clinic, improvements have been made to make these products even more effective as therapies. These changes are reflected in the latest rules of the system for generating non-proprietary names that will see the end of the “mab” stem.

Although no more products will have names ending in “mab”, monoclonal antibodies will continue to form the basis of many important and innovative therapies available to patients for years to come.